Original reporting, informed dialogue, and sharp debate all contribute to a healthy democracy in local communities. But local news outlets are dwindling as audiences and advertisers shift to digital and mobile platforms, often with a smaller footprint — leaving media deserts in locations where coverage once flourished. At the same time, promising local journalism experiments are cropping up across the country. Foundations and for-profit players are investing in innovative outlets as well as tools and models that reduce reporting costs and support civic engagement around breaking news.

How can these promising “green shoots” be widely planted and fully cultivated? More broadly, how can we better understand and effectively address the dynamics that shape how people learn about local issues, and about ways to participate in the civic life of their communities?

We believe that using systems thinking to map the Local News & Participation system can bring new understanding to all who want to support active citizens and vibrant media as vital elements in a healthy democracy.

With input from local news analysts, editors, journalists, funders, and other stakeholders, the Democracy Fund has generated a map of this system — starting with the reality that the Internet is transforming the dynamics of local news and providing remarkable new opportunities for public engagement.

Version 1.0 of the map centers on the powerful economic shifts that have jolted the local news landscape, and on the innovative efforts to create and sustain digital approaches for reporting and public dialogue. The map is grounded in our assessment of the key factors that affect the health of democracy and the local public square.

Local News and Participation: Role of the Public Square

In a healthy democracy, people need reliable information, a watchdog to hold the powerful accountable, and opportunities to express and compare opinions on the issues of the day. Original investigative reporting, informed dialogue, and sharp debate all feed democratic engagement at the local level. Together these form a public square – a venue for citizens to learn, organize, engage, and be heard.

In the U.S., our public square sits at a crucial turning point – facing important opportunities and threats to the ongoing vitality of political participation in our communities and nation. The Internet’s massive disruption to local news ecosystems has produced both significant opportunities and real threats to the health of our democracy. As powerful economic shifts have jolted the local news landscape, innovative efforts to create and sustain digital approaches for reporting and public dialogue have also emerged. The Internet is transforming the dynamics of local news and providing remarkable new opportunities for public engagement. Promising local news experiments are cropping up across the country. At times, these new platforms are meeting community information and participation needs more effectively than legacy news institutions had been able to in the past. At the same time, local legacy news outlets are shrinking as audiences and advertisers shift to digital and mobile platforms – leaving news deserts in locations where coverage and vigorous conversation once flourished. How can we better understand and effectively address the dynamics that shape how people learn about local issues and ways to participate in the civic life of their communities? Mapping the dynamics around local news and participation brings new understanding to all who want to support active citizens and vibrant news media as vital elements in a healthy democracy. The Democracy Fund Engagement Program team has generated a visual map of the dynamics influencing the public, news outlets, journalists, and others concerned with community information needs. Our framing statement is: “You can’t understand how local journalism enables or inhibits a healthy democracy unless you understand ________.”

In many places, news outlets are shrinking, disappearing, or splintering into disparate units. However, at the same time, some outlets and individuals have successfully built new business models that have not only helped maintain a flow of quality, relevant news and community information, but also helped increase civic engagement. This successful experimentation has bolstered the viability of some news organizations and encouraged other outlets to experiment further. This is the core story that emerges from our map and to understand it, we explore a number of related topics that we believe the media field must grapple with if we are to address the challenges facing our communities: 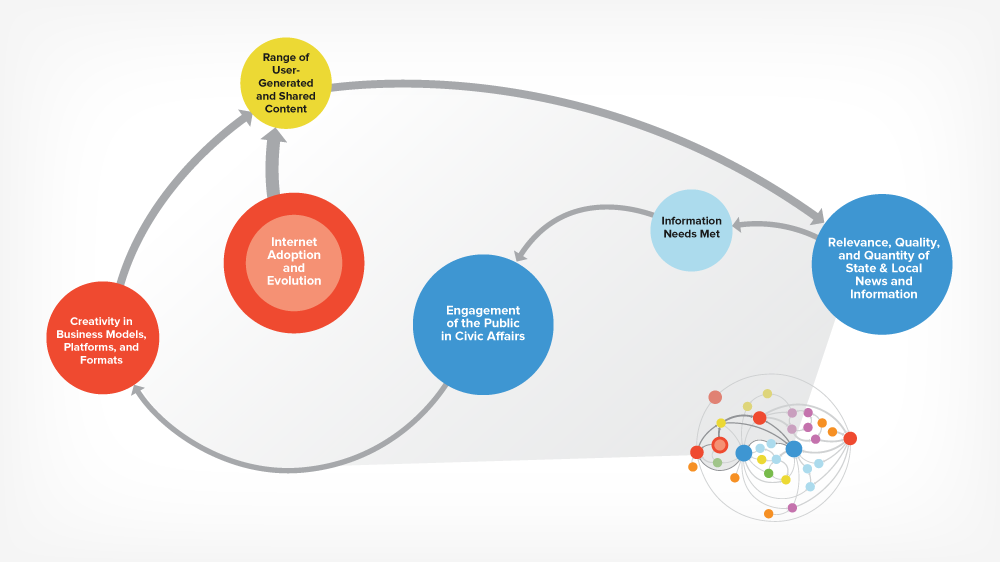 The Public as Publishers

Through technology, the financial barriers to entry into the media landscape have come down, and pathways for two-way communication between content producers and consumers have opened up. Internet technologies have increased the ability of individuals to create and distribute their own content as well as the content of others, fueling new interest and opportunities for civic engagement and increasing the amount and range of information available. At the same time, however, this has increased overall noise and raised new concerns about verification.

The Rapid Adoption of Mobile

Consumer practices and preferences, including an explosion in the use of mobile devices, are changing how news is produced, packaged, and promoted.

Local news outlets used to have an overwhelming advantage in attracting and retaining local advertising dollars. This has shifted in the Internet era. Large digital platforms are pulling advertisers and advertising dollars away from local outlets and becoming increasingly adept at personalizing advertising in ways that cement their hold on the marketplace. Mobile technologies also have led to changed advertising and distribution models that are driving a decrease in the level of resources available for local reporting, ultimately reducing the quality and coverage of local topics. 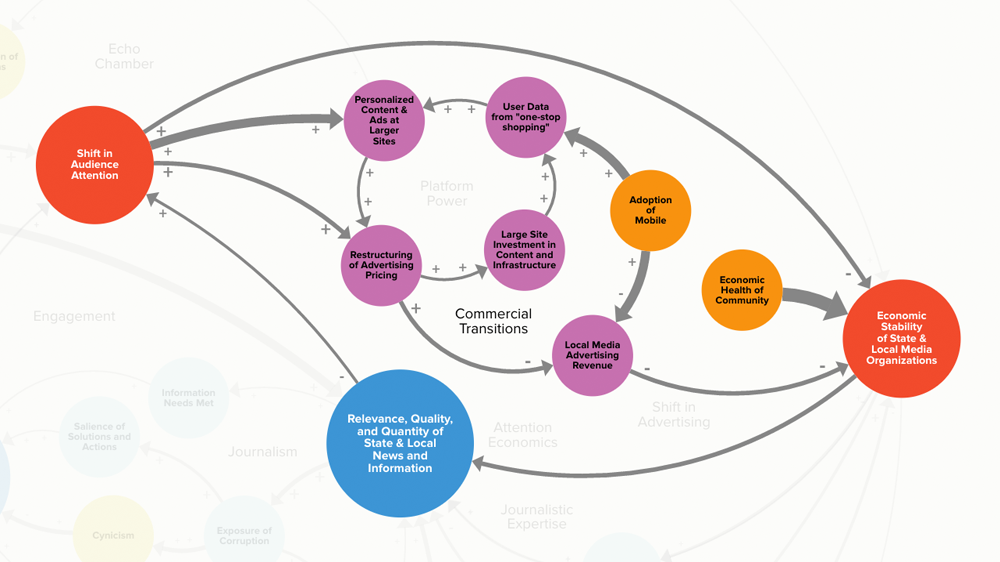 As the traditional advertising-based model of revenue has been dismantled for local news outlets, new sources of financial support have emerged. Individual subscriber/membership models, the backbone of public radio, are becoming an increasingly attractive option for other types of local news outlets, especially new nonprofit outlets. In addition, philanthropic support is becoming an increasing part of the revenue stream for local news via online nonprofit outlets. While government support is primarily used for infrastructure such as physical plants and broadcast equipment, occasionally public broadcasting funds are also used to support specific content including local or regional beats. Taken together, however, these new sources of income are not adding up to replace previous levels of support.

Ongoing Disruption of the Industry Players

Innovative outlets are replacing less nimble players who fail to maintain audiences or seize new opportunities. In this environment, new as well as established organizations find they must evolve rapidly or experience deep decline. In response to these trends, new entrants and incumbents alike are experimenting furiously with new revenue models and only sometimes succeeding; all but the largest face steady erosion of their viability. 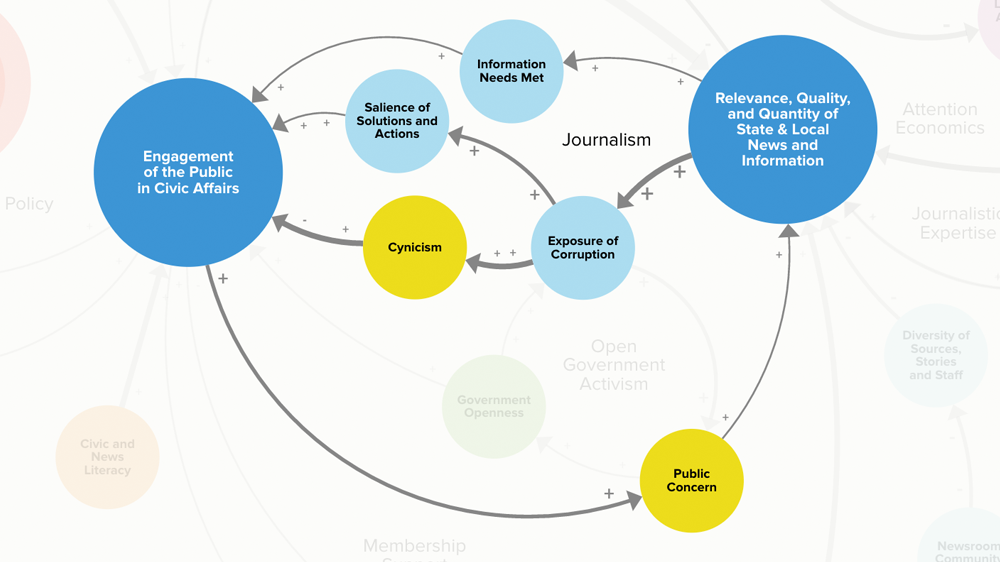 Maximizing the Impact of Journalism and Government Transparency

As the quantity, quality, and relevance of local news increases, so does the production of news that exposes corruption. Access to more government data and records, for example, can expose corruption and increase public interest in open data. When this is done in a way that also provides solutions and actions to resolve a problem, public engagement in civic affairs is increased. When this output fails to provide solutions to problems, however, the public becomes more cynical and less engaged. 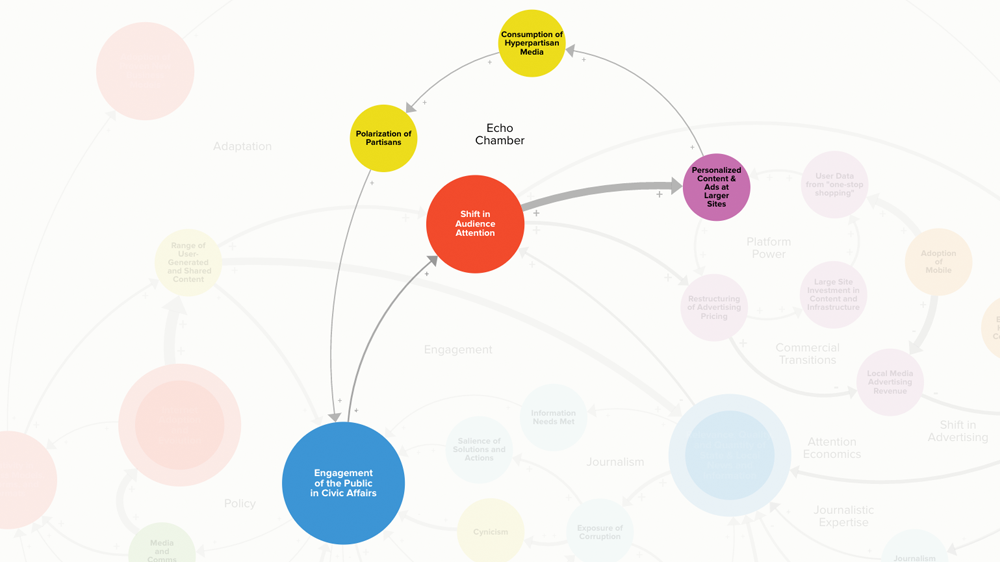 Partisanship in News Production and Consumption

Audiences are now increasingly able to select news that matches their own biases and beliefs, a behavior encouraged by the ability of large sites and social feeds to target content specific to these interests. In turn, outlets become more polarized and specialized to build and retain their audience base, increasing engagement among hyperpartisan audience members while making more centrist and undecided audiences more cynical about news and politics. 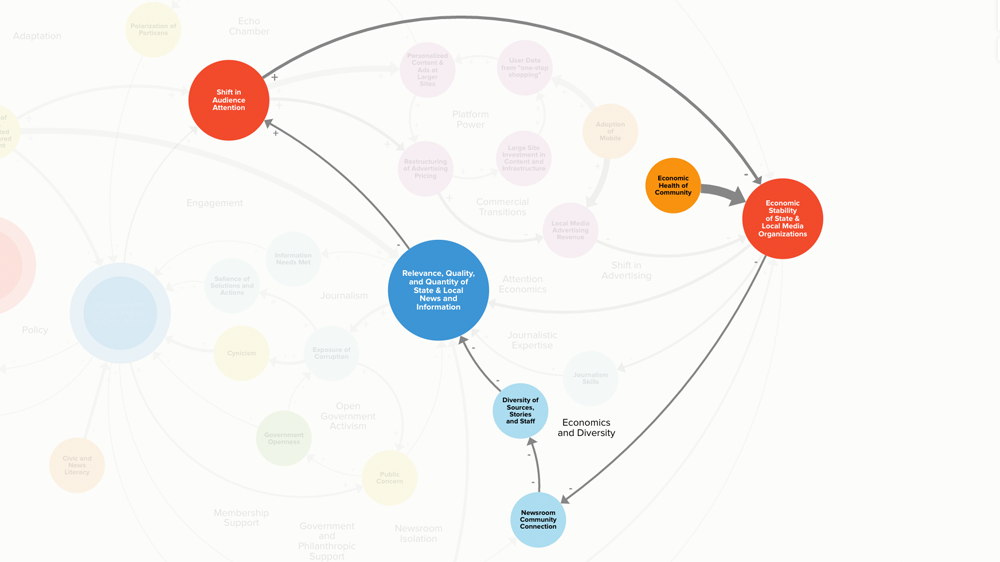 Journalistic practices can sometimes isolate newsrooms. In particular, journalists can appear detached or insensitive to community priorities when seeking a measure of objectivity or asserting independence.

Newsroom diversity, however it is defined – in terms of ethnicity, gender, age, ideology, or other factors – also matters to an outlet’s ability to engage the public. Having a range of perspectives and experiences within any news organization is vital to the generation of new ideas and connection with new sources, but diversity efforts have been a casualty of economic decline in much of professional news media. At the same time, the rise of digital media has created new ways for a wider range of community voices to be heard. 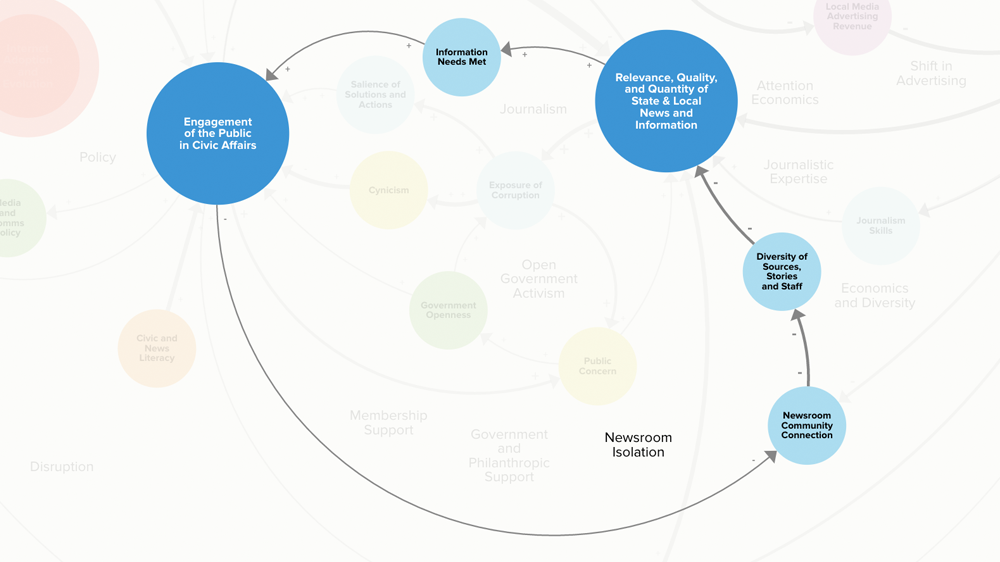 Conversely, newsrooms that are more diverse and able to connect with and report on different constituencies increase their engagement with community, which contributes to better reporting, editorial, and accountability practices. These contribute to an increase in the quality and sometimes quantity of information.

Public interest media and communications policy encompass a variety of issues and structures related to the ability of citizens to communicate with one another, express their own perspectives, access communications technologies and services at a reasonable or even subsidized rate, and protect themselves from libel or slander. Communications policy also regulates many of the actors who provide civic information and spaces for public dialogue, including Internet service providers, the owners of newspapers, radio and television stations, public access media facilities, cable companies, and others. Media and communications policy has a significant influence over the ability of local news ecosystems to support civic information and participation. For example, policy encouraging an open Internet and access to high-speed broadband can further increase the creation and sharing of user-generated content and lay the groundwork for experimentation in local news, while policy supporting local public media can strengthen state and local news media organizations with direct dollars for infrastructure and beats.

Changes in the journalism environment drive new priorities for continuing journalism education. The decline of traditional print and broadcast newsrooms and the rise of both small online newsrooms and even more decentralized citizen reporting via social platforms, has chipped away at the overall level of journalistic professionalism and integrity. Up-and-coming and citizen reporters are learning the trade from scratch, and are not necessarily aware of existing resources and institutions, while reporters trained for print and broadcast are struggling to adapt to the ever-quicker and more porous practices of producing online news. Skills once transferred through informal mentoring and on-the-job training, or through more formalized journalism education are now either missing, or being reconstructed so that they can be applied in a more participatory media environment.